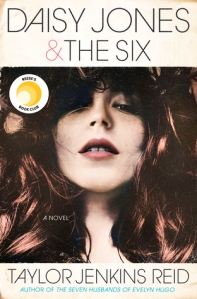 Boy, oh boy, Daisy Jones & the Six is everything I want in a juicy tell-all about celebrities—never mind that they’re fictional or real. It’s got claws both monstrous and human and a grip so tight that losing interest is the result of one successfully being able to slip away (or one never having fallen into it’s clutches in the first place).

This story is executed in the form of a script, which can either be a red light, a yellow light or a green light for readers in general. It’s not a traditional script in the sense that it’s actually written for a film, a show or for a play, but it’s a script where it reads like a long interview. For me, this format is a welcomed change from conventional story telling formats and I found it brilliant that Reid was able to instill a profound enough emotional depth to the story despite the severe lack of showing.

Moreover, the main characters here are brilliant. Daisy’s half a manic pixie dream girl and half an anti-manic pixie dream girl. She’s a typical Special Snowflake at one moment, and the opposite at another. She’s isn’t just beautiful and wild like the world’s shackles are nothing to her, she’s a mess and opinionated and strong and even self-centered. She’s not there just to help broody male characters lighten up and enjoy their lives, she’s there to challenge and pull the rug out from under them as well. It’d perhaps be more accurate to call her a muse.

Billy, on the other hand, you’d expect to be one of those typical, fictional rock stars. Those who live hard, play hard and is just everything you can think of under the umbrella of Rock’n’Roll. But, there’s more than meets the eye with him. He’s a coward and yet also brave, a liar but also a man of his word, and I’ll never get over how he does his best for  Camila.

The secondary characters are well written and characterized too. They are some of the more complex secondary characters I’ve come across. I love how Reid utilizes them to explore other topics and themes that wouldn’t have been touched upon in the main plot. Moreover, this book is one of the few that has a love triangle I don’t feel irritated by the thought of. It’s not a girl who can’t choose between two people, but a guy instead and that’s like a small breathe of fresh air.

All in all, if you’re alright with a story being more tell than show, and if you’ve a soft spot for celebrities and stories about them, Daisy Jones & the Six is a must try!

An introvert who loves thought- & emotion-provoking stories, and finds small but certain happiness in those with diversity. Know more here.

Surprise #bookmail from @definitelybooks #pansing 🙌🏻 Thank you so much for the sequel to This Woven Kingdom 💕
“Those who lacked the drive to survive are already dead. Those who are left will stop at nothing.” ✒️💬
Filled with beautiful imagery and rich depictions of Chinese culture, A Magic Steeped in Poison is the 1st book in duology featuring a girl who can perform magical feats using 🍵, desperately trying to save her dying sister whom she accidentally poisoned along with their mother.
When you feel the itch to buy more books but then remember your New Year's resolution to: