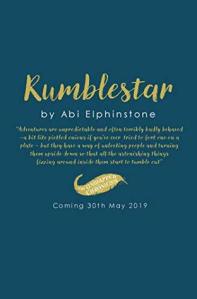 Thank you so much Pansing for sending me the ARC of this book in exchange for an honest review! Abi Elphinstone’s Rumblestar will be available at all good bookstores.

It seems as if I’m in the midst of creating a pattern for myself (once is chance, twice is coincidence and all that) because although I don’t dislike Middle Grade fiction, I don’t actively seek books of that genre to read yet I somehow still pick them up and end up nicely surprised.

Abi Elphinstone’s Rumblestar reminds me a lot of Thomas Taylor’s Malamander. They’re both Middle Grade fiction and they have similar characters—cowardly boys who get pushed out of their comfort zones by tough and selfish girls (I can see where they’re coming from but unfortunately, I can’t bring myself to like them), adults who aren’t trustworthy and magical creatures. They also have predictable plots and typical themes, which is expected from Middle Grade fiction, but unlike Malamander, Rumblestar isn’t as well-written.

This is because there is a lot more telling than showing in Rumblestar and while it does help to show character development, it’s not one that’s powerful and has the ability to make the reader empathize. This type of narrative also makes the story boring. I was very tempted to skip through a lot of parts just so I could get to the next plot point, but didn’t because Elphinestone weaves very rich visual imagery (and thus, a richly imagined world) into her narrative and I couldn’t get enough of that.

Moreover, some transitions between points of view within a chapter aren’t smooth. Perhaps this is only me being particular about things, but the story is written in third person omniscient and switching between, for instance, Casper’s mind to Utterly’s when it’s still Casper’s scene/chapter provides a jarring effect and it also breaks the moment.

As I’m reading the ARC of this book, I noticed that there is a few errors present (such as the misspelling of a character’s name). Hopefully, this gets corrected in the published edition.

Everything considered, Rumblestar is a better than average read, hence why I was nicely surprised by how much I liked it despite the certain aforementioned aspects. I think that had I not read Malamander first, I would maybe enjoy Rumblestar more.

An introvert who loves thought- & emotion-provoking stories, and finds small but certain happiness in those with diversity. Know more here.

Surprise #bookmail from @definitelybooks #pansing 🙌🏻 Thank you so much for the sequel to This Woven Kingdom 💕
“Those who lacked the drive to survive are already dead. Those who are left will stop at nothing.” ✒️💬
Filled with beautiful imagery and rich depictions of Chinese culture, A Magic Steeped in Poison is the 1st book in duology featuring a girl who can perform magical feats using 🍵, desperately trying to save her dying sister whom she accidentally poisoned along with their mother.
When you feel the itch to buy more books but then remember your New Year's resolution to: